This article was extracted from the Crime Prevention Association of Toronto's (CPAT) website: www.cpatoronto.org/home/programs/neighbours-night-out


“The Neighbours’ Night Out Program is a fun and easy way to help create a safe community and get to know your neighbours. More than a quarter of million residents have participated throughout in the GTA since the program started in 1985. Neighbours are encouraged to hold small parties with people in their area, on their street or in their buildings.  It’s a great way to get to know your neighbours and build community spirit.
Neighbours’ Night Out provides an opportunity for neighbours, families, friends and community groups to have a fun night, get to know  each other better and build community spirit.” - former Mayor David Miller
For information on starting or helping with a Neighbour's Night Out block party, please contact our office. Click here to download the brochure.
Neighbours' Night Out (NNO) on the Lakeshore
Your neighbours have been meeting once a month for seven years.  The NNO has grown larger and larger and it continuously welcomes new community members.
The Toronto Star wrote about this NNO in April 2010:
www.thestar.com/yourcitymycity/article/789192--dreamers-and-doers-neighbours-nite-out-builds-a-stronger-community
Dreamers and Doers: Neighbours Nite Out builds a stronger community
Published On Sat Apr 03 2010
It’s a cold, blustery Thursday night, but inside the Blue Goose Pub just behind the Mimico GO station, it’s warm and friendly.
People wander in to their usual tables, and put in their beer and wine orders with their server, Judy. Pizza, nachos and chicken wings soon follow.
It’s Neighbours Nite Out — where once a month, residents of the south Etobicoke area gather to tell bad jokes, share local gossip and talk about everything from one couple’s recent trip to Africa to the Toronto mayor’s race.
It started about six winters ago, when Jane DuBroy came up with idea to organize a night out during a time when poor weather keeps people at home, hibernating.
“It’s cheap and it’s cheerful. Anybody is welcome, and if nobody shows up at least Bil and I got a night out,” DuBroy said, referring to her partner, Bil Thuma.
But that never happens, because the neighbours always turn up. And by the end of this evening there are nearly two dozen people, some who have known each other for years, and others who are just meeting for the first or second time.
This simple event has created a special bond.
Need to borrow a tool? Done. Need someone to collect the mail and feed the cats? Done. Need a ride to a doctor’s appointment? Done.
“If somebody is sick, it’s easy to ask somebody to pick up groceries,” said Thuma, a mining engineer. “Everybody is generous, but until you establish a linkage, you can’t access it.”
And another bonus is that when neighbours know each other and their routines, it can help prevent crime.
“They are the eyes on the street,” said Thuma. “People know your habits. They know if something is amiss.
“If you don’t know your neighbours and their house has been broken into, you wouldn’t know about it.”
DuBroy, a communications specialist, is the magnet who brings the neighbours together, said April MacDonell, who remembers that the first evenings drew only a handful of people.
The group keeps expanding beyond the street in New Toronto where DuBroy and Thuma live.
“I remember the first email, when you used to be able to read all the names in one line. Now you have scroll down and down,” said MacDonell.
As one who grew up on a farm, MacDonell said it can be a challenge to build a small-town feel in the big city, but it can be done.
“I think it can be cultivated to a certain extent. People now wave and say hello. I think you get what you make out of a community,” she said.
And as someone who doesn’t drive, she said her neighbours have always been helpful. “I’ve never had to take a cab,” MacDonell said.
For Carole Freeman, it was a chance meeting with DuBroy outside the coroner’s office last year, as the two women stood next to each other while waiting to honour a soldier slain in Afghanistan.
When DuBroy learned Freeman lived in a co-op building only a short distance away, she invited her to Neighbours Nite Out. She’s been coming ever since.
“It’s one of my best nights,” said Freeman, adding the group has also bonded to fight certain types of development in the area — twice going to the Ontario Municipal Board and winning.
Others, like Jeff and Eileen Albert, were drawn by chance.
The Alberts, who were living in Palgrave, decided they wanted to live in that little pocket of south Etobicoke. Eileen — who describes herself as assertive, not aggressive — typed up a letter telling homeowners they were looking to buy and went knocking on doors.
When they got to DuBroy’s door, they chatted for a long time. And she, of course, invited them to join Neighbours Nite Out.
“It was almost two years ago,” said Eileen Albert. “How cool is it to meet a whole new group of friends?”
Her husband, Jeff, added that while they were originally drawn to the area because of its closeness to the water, it’s the friendships that draw them now.
“There’s something unique about that area. The people there are a close-knit group that we have come to enjoy. The total package is there,” he said.
While the Alberts haven’t managed to buy in the area yet, they are renting a place near the Humber College campus and waiting to become neighbours in every sense of the word.
Neighbours meet:
When:   every last Thursday of the month
Where:  Blue Goose Tavern, 1 Blue Goose St., Etobicoke, ON, M8V 2R5  (416) 255-2442 www.thebluegoosetavern.com/
Time:  around 6:00 pm (18:00 hrs.) start (people arrive when they can)
Neighbours come from as far away as Long Branch, Port Credit, North Toronto. All welcome. 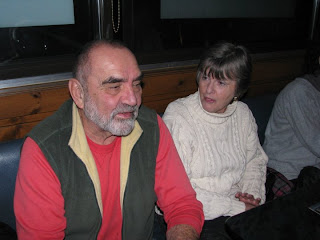 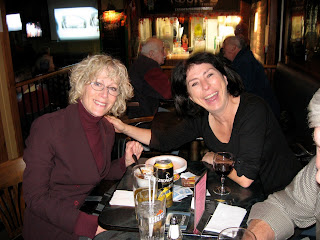 Incidence in the vicinity

-February 2011: Missing person and violent street robberies. (February 11) Fifth Street neighbour witnessed someone trying to open car doors along Fifth Street-22 Division was contacted and a description provided.
-January 2011: Few houses broken into on 8th Street.
-December/January 2011: Break-ins on 4th and 5th Street, near Lakeshore Drive.
-November 2010: 5th Street car broken into twice.
-October 2010: Attempted daytime break-in in the Lakeshore area. Neighbour called 911 and two suspects were apprehended by the police.
-May 2010: Property, e.g. tools, ladders, etc, stolen from various homeowner's yards or sheds along 3rd and 4th Street in the past weeks.
-May 2010: Boisterous youths loudly partying aroud 6:30 am on personal property in the Lakeshore Drive area. Youths were in the water and crossing private yards. Police were called.
-July 2009: Two daytime break-ins in the Lakeshore area. Thieves left with a large amount of property and ramsacked both homes. Both houses were entered through back doors.